We were delighted to welcome Daniel Keatings and many other guests to the ‘Official Opening’ of the new school building last Friday. It seems strange to be having an ‘official opening’ after we have been in for five months – but such ceremonies are always held after the building has been occupied. 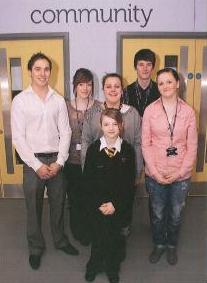 There were many special guests at the ceremony – many of whom have had long associations with the school or the town. We were especially pleased to welcome back Gordon Reynolds who recently stepped down as Chair of Governors, Brian Tyler, the former headteacher of the school, and Derek McNaught, a former Governor and father of one of our current Governors and a member of staff. Other guests included the other headteachers in the town, representatives of the various companies involved in the design and building of our new school, as well as representatives from Northamptonshire County Council. The student body was represented by the ‘House of Representatives’ – two students from each of our five houses.

As was mentioned in the speeches, we asked Daniel to perform this ceremony – rather than someone that the students might not necessarily relate to – as he is, of course, a former student at Kingswood and a fantastic role model for our students. Daniel unveiled a plaque in the Main Reception area, commemorating the opening ceremony, and Hannah Reynolds – one of the student representatives – presented him with a small memento of the day.  Daniel flies off to Cancun in Mexico this week to continue his training for future competitions – including, of course, the 2012 Olympics in London.  We are grateful that he could take the time out of his busy schedule to come back to his ‘old school’ and we wish him every success in his future competitions. 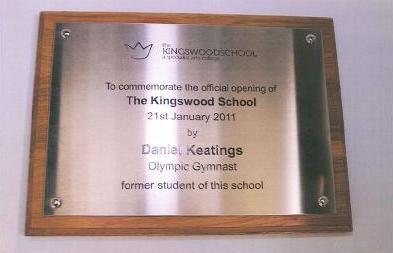 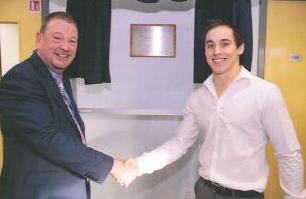