During the February half term a group of year 13 students went on a school trip to The Gambia.  It was a fun packed week full of mixed emotions and learning about the African culture.

For three of the days we were there we went to the village. This provided us with the

opportunity to meet our sponsored families and see what our fundraising was going towards. All of us agreed that walking into the village was an amazing experience. We were greeted by a mass of children all singing and wanting to hold our hands. Music and African dancing welcomed us. This was clearly an emotional experience as

a number of the students were overwhelmed and began to cry. The students who had previously visited the village were greeted immediately by the small hands of their sponsored children. We were made to feel like family as we shared our charity gifts. The chief of the village/headmaster of the school welcomed us all and thanked us for all we have done.

their homes. This was a humbling experience as we soon realised how materialistic our lives can be. Families were given personal gifts, time was spent playing with the young children and we assisted with general tidying and every day activities. Some of us were given gifts of the traditional Gambian dress. It was a cultural eye-opener.

The traditional football match took place between the Penyem girls’ team and a team of our own. It was a tough battle as running on the sand in extreme heat was difficult but once again we triumphed with 2 goals to 0. The goal scorers being the almighty Joe Dixon who we were counting on to win the match for us and Jenna Leech who scored an amazing penalty. After the match the team went for some victory food but as usual they were too busy tweeting and snap chatting to even realise that they had to order food!

During the third day we spent time in the village school. This involved playing with the

younger children and Lauren and Joe taught a Math and Literacy class. The school has no technology and minimal resources yet the students were engaged and willing to learn. We were then able to distribute the mosquito nets that our school and the Northampton Trustee Fund had raised monies for. Saying goodbye was another emotional experience and a number of us had grown attached to our children and did not want to bid our farewells. As we left in the jeeps, lots of children chased after us waving goodbye.

The highlights of the trip were definitely visiting the Penyem Village, an afternoon trip to the monkey park and the hustle and bustle of the Senegambia Market. It was a life changing experience and one we will not forget. Several students have expressed a desire to return next year. We were not able to see the ambulance that we fundraised for this school year. The charity had not bought it at the time of our visit, but since then we have been sent pictures and we are really pleased to have been a part of that. Special thanks to Laurie Magee, Faye Austin, Diane Blakeston, Carol and Hans Storrie. 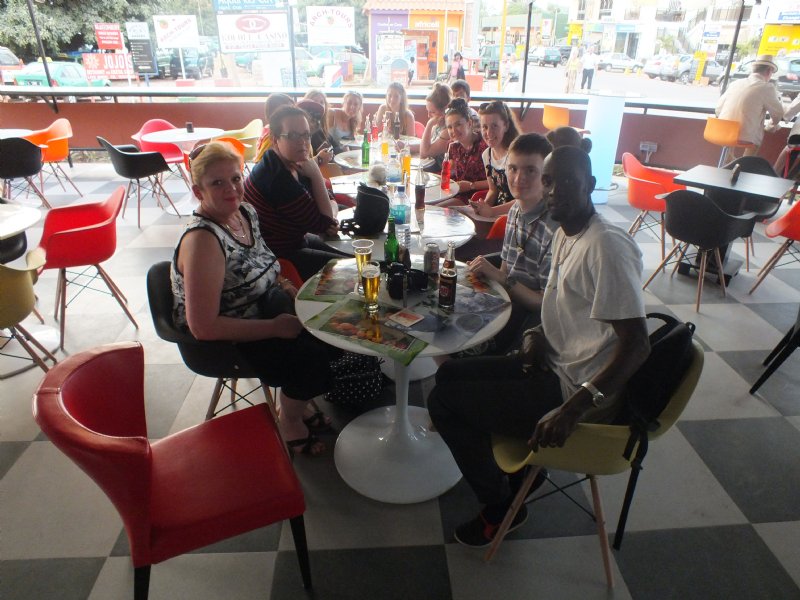