On Wednesday 10th July Hermann Hirschberger MBE visited the Year 9 students and shared his experiences of the Holocaust. The students were involved in a set of workshop activities before listening to Hermann’s testimony.

Hermann was born in 1926 in Germany. In 1936, Nazi laws ruled that Jewish children

could no longer attend non-Jewish schools, so Hermann and his brother had to move to the Jewish school, which was 1.5 miles away. During his testimony, Hermann shared his experiences of the verbal and physical attacks he endured when walking to and from school. The students listened to Hermann as he spoke about Kristallnacht, or ‘Night of Broken Glass’ and the discrimination he and his family faced by members of the Gestapo and the Nazi regime.

Hermann’s parents realised that it was not safe to stay in Germany and tried to arrange for his family to leave. Sadly, they were unable to obtain visas for the whole family, but did manage to arrange for Hermann and his brother to be sent to Britain on the Kindertransport. This was the last encounter Hermann and his brother had with their parents. With the outbreak of war, his parentswere unable to leave. They were sent to a camp in the Pyrenees where they were able to write letters to their children, until they were deported to Auschwitz-Birkenau in 1942 where they were both killed.
After sharing his story of survival, Hermann invited the students to ask him questions.

The students thought carefully about their questions and listened respectfully as he responded. Hermann is a true inspiration and we were all moved by his personal testimony. He spoke about his experiences as if they happened only yesterday and it is clear that such memories will always stay with him as they will now stay with us.
The students had time to reflect on their experience of meeting Hermann.   Here are some of their responses:
“I realise how disturbing and heart-breaking your childhood must have been. The Nazi’s were very powerful and you must have been frightened…with what you told us today, I think lots of us will change our actions and thoughts about how we treat others.”  Lousie Anne Gillies

“The most memorable part of your testimony was when you said, ‘fear is a terrible travelling companion.’ This made me think about experiences of my own that have made me fear something. From this quote I have realised that no matter how big or small the problem, you can always overcome your fears.”  Beth Smith
“Today I expected a man that would remember the past and still be afraid of the atrocities that Hitler forced upon the Jewish society, but with you Hermann I found a determined, brave, strong and open individual.”  DJ Brooker
“It was a great honour listening to your testimony and an even greater honour to shake your hand. I will tell your story to future generations and hope they will appreciate it as much as I do. You are a strong and brave man.”  Robyn Smith
By Michelle Hodgkins and Laurie Magee, RS Department. 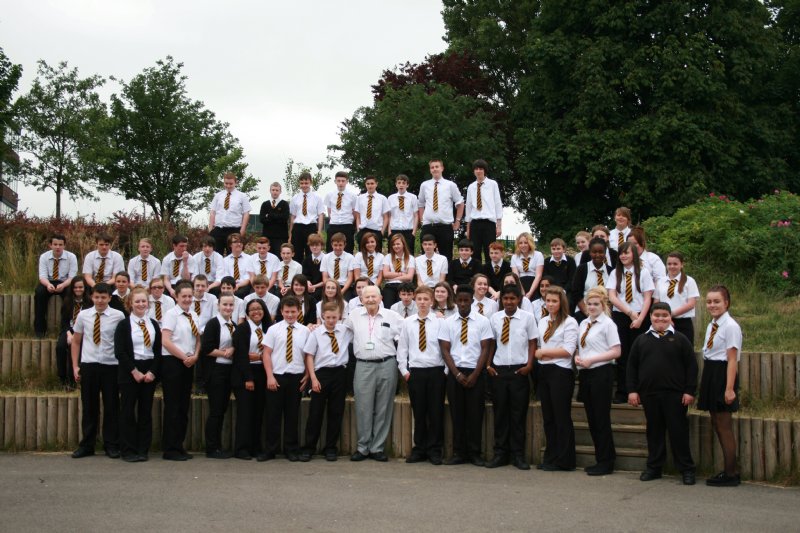